What a day! Meeting with the planning division of a major banking group this morning, then to City Hall to be one of the judges for the new Toyotomi Hideyoshi tourist route logo, then to Tokyo to attend a book launch as a guest of friend, Mr. Akechi Kenzaburo, a historian and researcher, and the descendant of Akechi Mitsuhide, the samurai who is remembered as the “traitor who killed Oda Nobunaga.” Akechi Kenzaburo now researches the truth about his ancestor, and has uncovered some interesting facts regarding the shocking attack on Nobunaga in 1582. The party was also attended by the ancestors of warlords Kuroda Kanbei and Uesugi Kenshin! 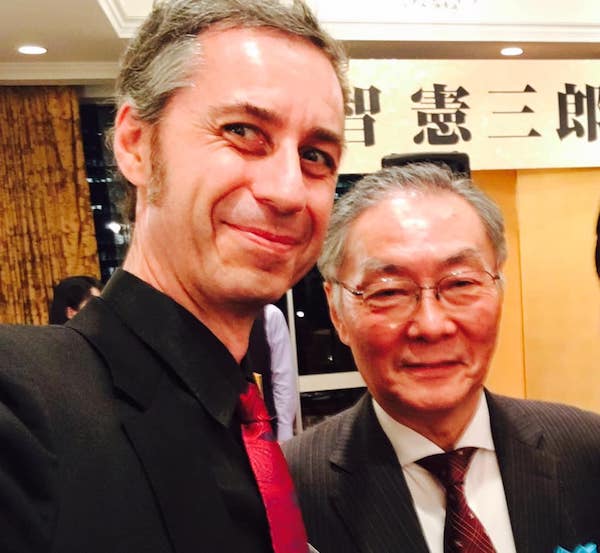 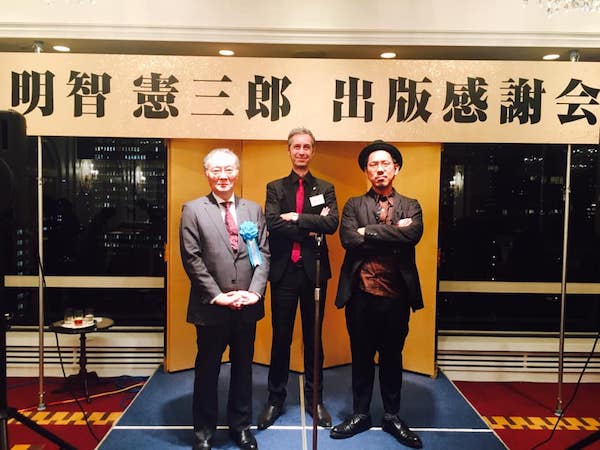 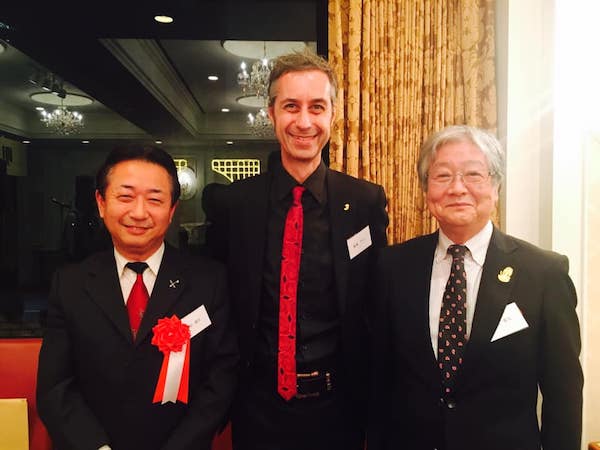 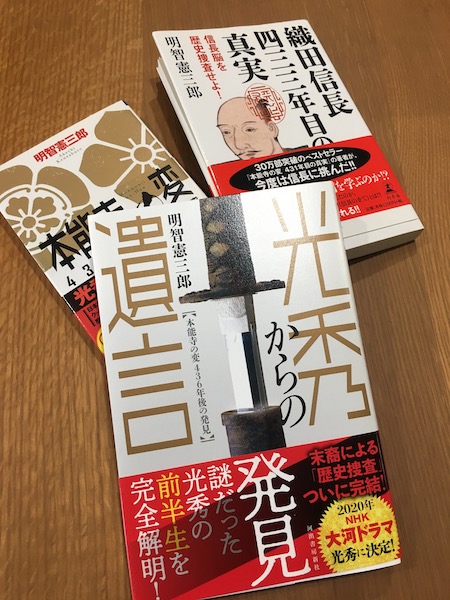 Episode 3 of the NHK World TV series “Ninja Truth” hosted by some Australian history freak is now available On Demand, On Line. See it here: https://www3.nhk.or.jp/nhkworld/en/vod/15minutes/3019043/ 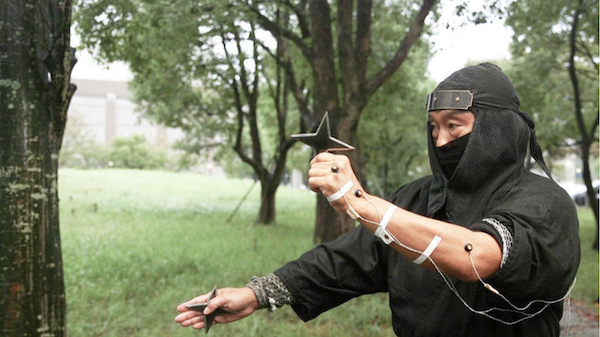 MC’d the opening of the final stages of the now 100% complete Nagoya Castle Honmaru Goten Palace today! It opens to the public next week! This final third section is known as the Jorakuden, and was made exclusively to accommodate the Shogun on his trips between Edo (Tokyo) and the Emperor’s palace in Kyoto. Nagoya Castle’s Honmaru Goten was the finest, most elegant of all the palaces, richly decorated in gold and lacquer, with art works by the most talented of the leading Kano School of Art. Everything has been 100% authentically created by hand, by the remaining leading traditional craftsmen. Besides an audience chamber, entertainment space and sleeping rooms, it also features a steam bath. One of the highlights is the gorgeous transom, hand carved from a single slab of wood, and painted with vivid colours. This is the ultimate in samurai architecture and art! This is a must see! Enjoy these few advance photos. 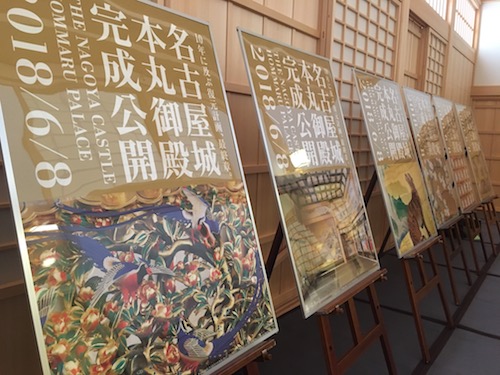 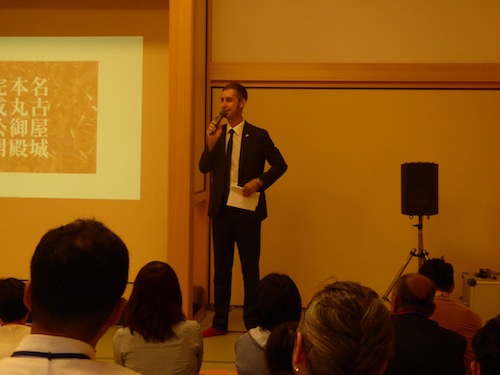 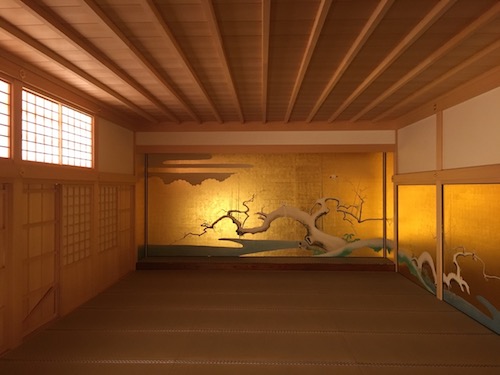 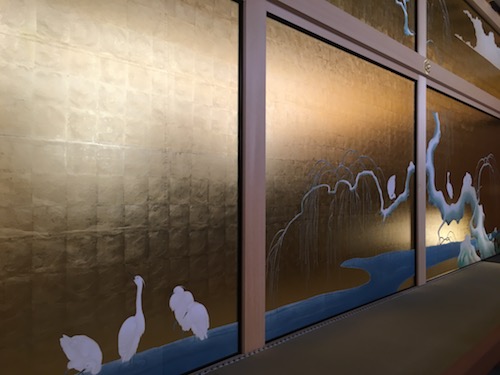 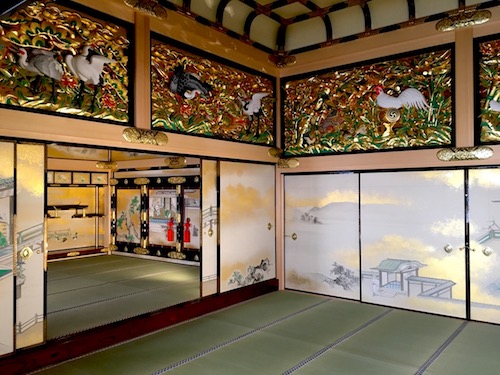 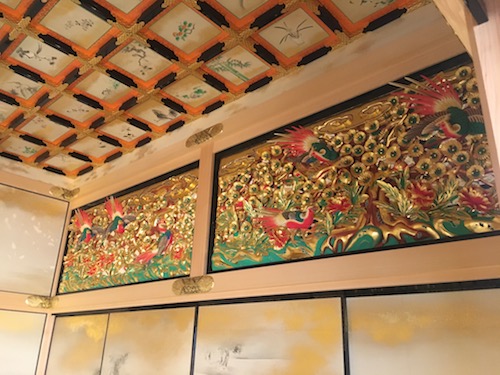 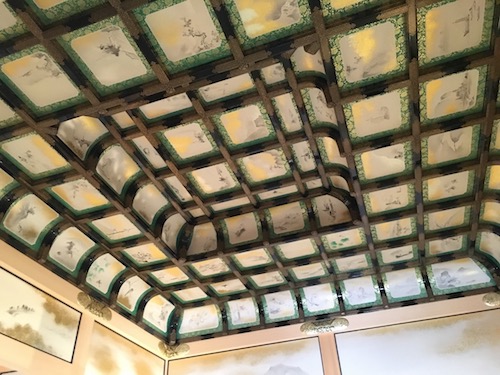 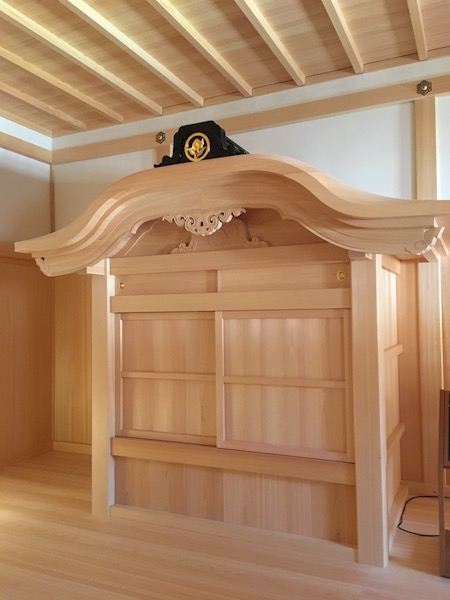 777th time to visit Nagoya Castle!!
This time was for a magazine shoot and interview for a castle special coming out in March!

Thanks to Gifu Prefecture and Sekigahara Town, I’ll be hosting two free tours of Sekigahara, site of the greatest and most decisive samurai battle in history.

The tour includes a look at the battlefields, a full English explanation of the lead up to the battle, as well as details on the battle itself, the participants, and the result of this major turning point in Japan’s history.

The itinerary is slightly different each tour, The March 10 tour offers tour members the chance to wear samurai armour and learn a number of swordfighting techniques. The March 17 tour includes working with a traditional swordsmith to make a samurai knife, which can be taken home as a souvenir.

The tour is open to non-Japanese currently residing in Japan only, and numbers are limited to the first 20 respondents for each tour. Check the details below! Bookings can be made by email to: sekigaharatours@gmail.com

Sekigahara Tourism Ambassador, samurai history and culture researcher and author of the English book, “The Battle of Sekigahara“, Chris Glenn will guide you through the entire tour, providing information and answering any questions.

First day of the new year, what better way to start things off than with a visit to Nagoya Castle! 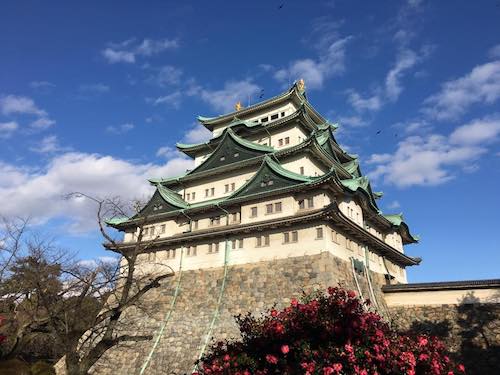 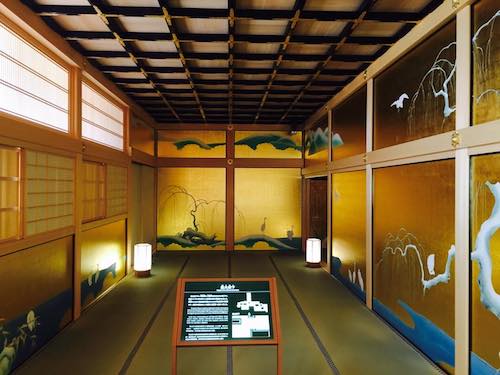 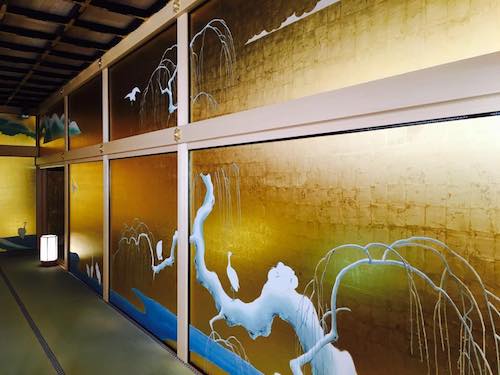 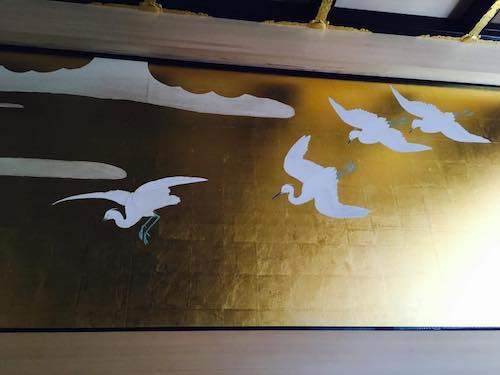 Just took part as guest speaker at the 457th anniversary of the Battle Of Okehazama event on the old battlefield itself. 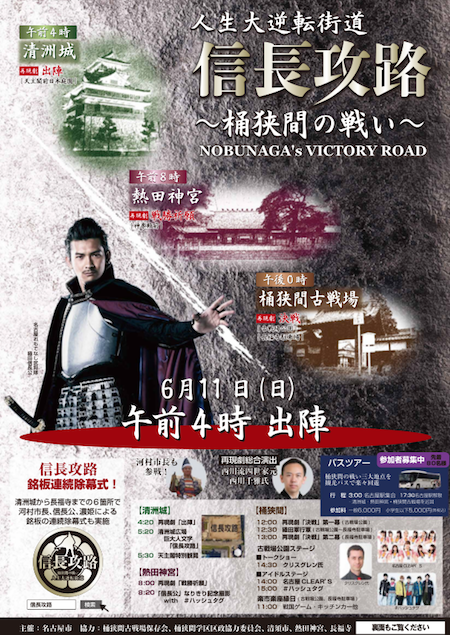 In 1560, local warlord Oda Nobunaga with just 2,500 samurai defended his lands from an encroaching army of 25,000+ enemy Imagawa troops. (some estimates put the enemy numbers at 40,000!) On June 11, the Imagawa captured two important Oda held fortresses, establishing a firmer base with which to conquer Nobunaga’s territories. The following day, June 12, Nobunaga’s small but determined forces attacked the main headquarters of the Imagawa forces, killing their leader, Imagawa Yoshimoto. With most of the Imagawa generals also killed in this short, swift attack, the main Imagawa body was lost. This battle greatly enhanced Nobunaga’s reputation, and set him on the road to national domination. 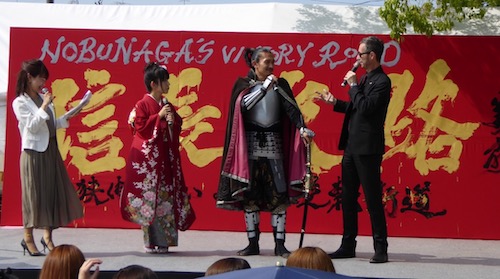 Todays topic centered on Nobunaga, the man, as well as how he managed to topple such a huge enemy force. Great to see such a huge turnout, and to launch the new tourist route, Nobunaga’s Victory Road, following Nobunaga’s path from his castle at Kiyosu, 6km north west of Nagoya Castle, to Atsuta Shrine, where he paid his respects, before attacking the Imagawa at Okehazama in the southern suburbs of Nagoya City. 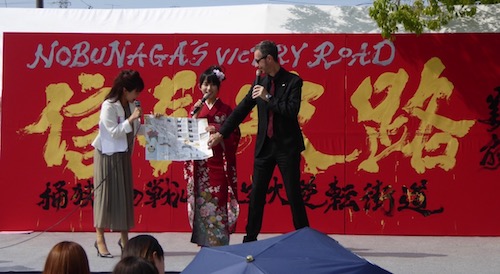 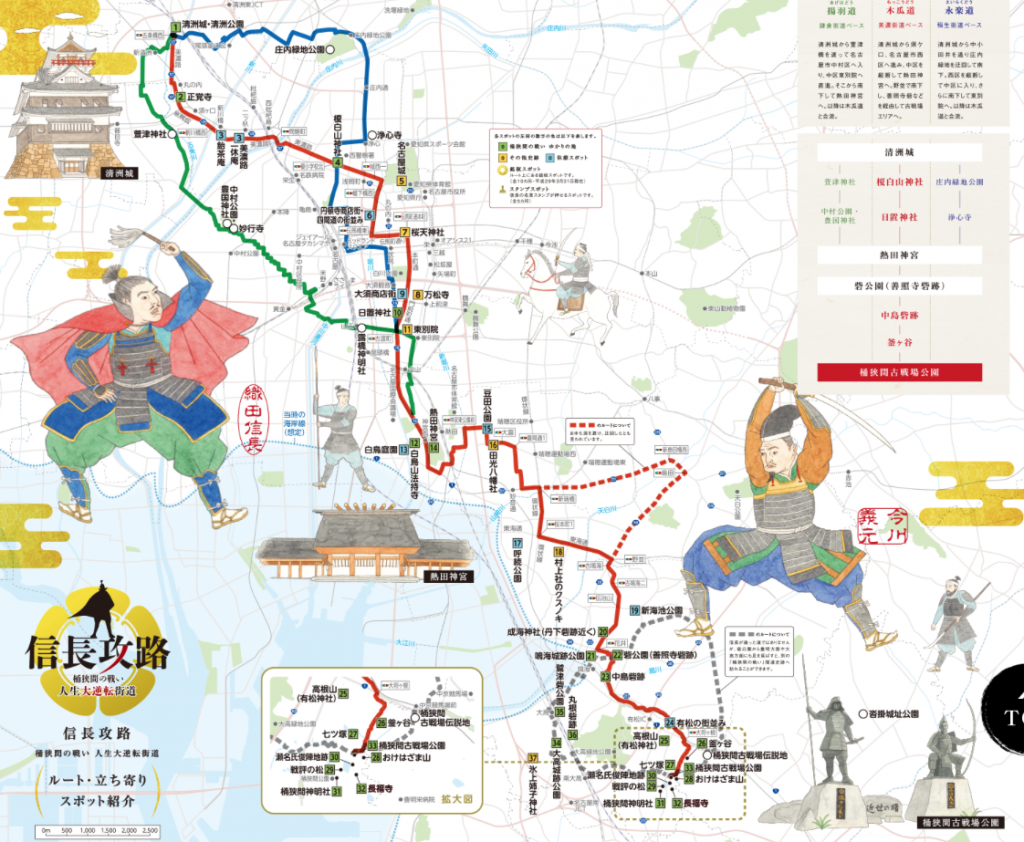